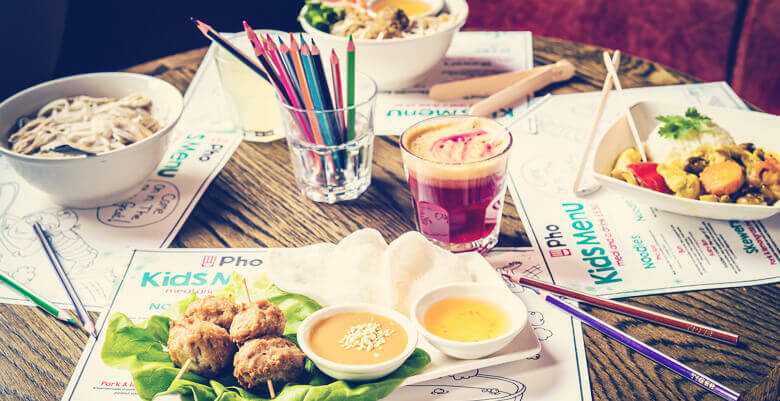 Pho! My new favourite place. I felt like I was in food heaven. Virtually everything was gluten free, most food is egg free or at least egg free options.

It took a whilst to persuade my daughters (now 5 & 8) to go and try it as opposed to pizza, fish n chips or burgers, but they were eventually persuaded after phoning up a couple of the places that advertised as gluten free, and finding out they used their friers for gluten too even though they advertise on the menu that they didn’t (Note to self: ALWAYS PHONE & CHECK SOMEWHERE IS SAFE!).

Pho for me was a safe option, and recently accredited by Coeliac UK.

As you walk in the door, your senses are enamoured. The smell was lovely with fresh and rich aroma of lemongrass and bone broth,  I immediately felt at home and my youngest immediately commented on the inviting smell. The decor was pretty cool and they had a great playlist which played David Bryne as we entered. That was me sold.

My eldest who has an egg allergy as well as coeliac disease was most impressed that she had quite a varied choice on the kids menu. She couldn’t decide on the meatball skewers or noodle soup, – then finally deciding on the noodle soup in beef bone broth. This is where I was in heaven! Since being on hols I haven’t fed my kids their weekly / daily dose of bone broth – so yes! I can actually get some down them and boost their immunity – give them some extra special dose of minerals.

Ada chose the noodle soup, and P chose the egg fried rice with chicken. I went for the special and my hubby went for … We also has fried squid to start, and prawn crackers – which were all gluten and egg free – amazing!

Unbelievably exciting to be trying exciting food safely. These kids really can’t try any other place due to hidden gluten content in sauces and even food fried or battered in egg . I hope by the time they get to teens, there will be so many more options like this for them to experiment with food in the way that most people take for granted.

One lapped the food up even drinking the remaining soup out of the bowl when she said she was stuffed. The other wasn’t so keen on her fried rice, though admittedly it was quite greasy.

After our third bit too long wait in between courses the kids eventually received their banana fritter and mango sorbet (the ice cream has egg in). But again, so great that the banana fritters were both gluten and egg free – something that doesn’t often happen. The kids loved it whilst the adults waited eagerly for their dessert and spotted the waitress wrestling with the overly iced ice cream – seriously struggling to get it out the tub with the scoop!  We managed to pay and get our last bus back to the park and ride with happy if rather over tired kids.

They want to go back and get try other things off the menu.

When asked whether Pizza Express, Leon or Pho was their favourite, they did say Pho! I think the decor, excitement of s choice and the healthiness of the food wins over despite a little bit rubbish and slow service.

Author: EggainstTheGrain
Filed Under: Eating Out, London
LEON – a review

1 thought on “Pho! A restaurant review”